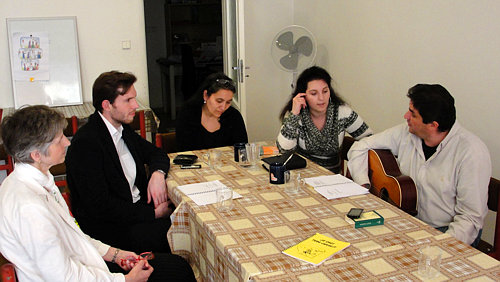 Tonight at our Roma Bible study, the evening started off very quietly. Dawn and I arrived and the only other people there were the pastor and his wife. With our limited language skills, we barely got past “hello” but we smiled a lot and they did as well. We were there about 15 – 20 minutes early and as the time to start got closer, we did have one or two other people come in and then leave. I went to stand out on the sidewalk and wait for Joe, my colleague as I assumed he would be showing up soon. When he did not, I called him and he told me that something came up to change his plans and wouldn’t be able to come. Then a little later, a Czech lady walked up and started looking at the literature in the window and was obviously waiting for someone. I asked her if she spoke English and she said she did a little. I found out that she was meeting another Czech person there… a young man who has been at our meetings the last two or three times. They both have some interest in Roma ministry.

The picture shows the older Czech lady and the young Czech man, Martin. After we all settled in and realized that no one else would be there, the pastor asked Martin if he spoke English. he said yes and then we suddenly were brought into our first conversation with the pastor. It was an unexpected blessing. Martin and I worked through a few language rough spots but we were able to actually communicate pretty well. The Czech lady also jumped in and helped occasionally. I am sorry but I cannot remember her name… she said it was an old Czech name that meant “sunlight.” Well, this turned out to be a very nice evening for us and I believe that there is a reason for everything under the sun. One positive reason for the scenario which unfolded tonight was simply to allow Dawn and I to start to get to know these dear folks better and share our heart for ministry with them. Yes, this was a good evening… thank you Lord for opportunities that You send our way… amen.