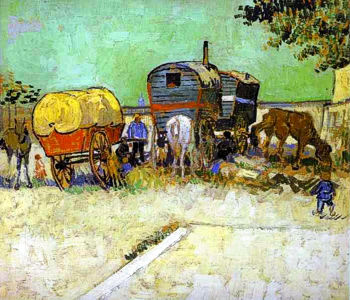 Linguistic and genetic evidence indicates the Romanies originated from the Indian subcontinent, emigrating from India towards the northwest no earlier than the 11th century. The Romani are generally believed to have originated in central India, possibly in the modern Indian state of Rajasthan, migrating to northwest India (the Punjab region) around 250 BC. In the centuries spent here, there may have been close interaction with such established groups as the Rajputs and the Jats. Their subsequent westward migration, possibly in waves, is believed to have occurred between AD 500 and AD 1000. Contemporary populations sometimes suggested as sharing a close relationship to the Romani are the Dom people of Western Asia and North Africa and the Banjara of India.

The emigration from India likely took place in the context of the raids by Mahmud of Ghazni. As these soldiers were defeated, they were moved west with their families into the Byzantine Empire. The 11th century terminus post quem is due to the Romani language showing unambiguous features of the Modern Indo-Aryan languages, precluding an emigration during the Middle Indic period.

Genetic evidence supports the mediaeval migration from India. The Romanies have been described as “a conglomerate of genetically isolated founder populations,” while a number of common Mendelian disorders among Romanies from all over Europe indicates “a common origin and founder effect.” A study from 2001 by Gresham et al. suggests “a limited number of related founders, compatible with a small group of migrants splitting from a distinct caste or tribal group.” The same study found that “a single lineage … found across Romani populations, accounts for almost one-third of Romani males.” A 2004 study by Morar et al. concluded that the Romani population “was founded approximately 32–40 generations ago, with secondary and tertiary founder events occurring approximately 16–25 generations ago.”

In 1322, a Franciscan monk named Symon Semeonis described people resembling these atsinganoi (meaning “untouchable” in Koine Greek: α+θιγγάνω) living in Crete and, in 1350, Ludolphus of Sudheim mentioned a similar people with a unique language whom he called Mandapolos, a word which some theorize was possibly derived from the Greek word mantes (meaning prophet or fortune teller). Around 1360, the a fiefdom, called the Feudum Acinganorum was established in Corfu, which mainly used Romani serfs and to which the Romanies on the island were subservient.

By the 14th century, the Romanies had reached the Balkans; by 1424, Germany; and by the 16th century, Scotland and Sweden. Some Romanies migrated from Persia through North Africa, reaching the Iberian Peninsula in the 15th century. The two currents met in France.

Romanies began immigrating to North America in colonial times, with small groups recorded in Virginia and French Louisiana. Larger-scale immigration to the United States began in the 1860s, with groups of Romnaichal from Britain. The largest number immigrated in the early 1900s, mainly from the Vlax group of Kalderash. Many Romanies also settled in South America.

When the Romani people arrived in Europe, the initial curiosity of its residents soon changed to hostility against the newcomers. The Romani were enslaved for five centuries in Wallachia and Moldavia, until abolition in 1856. Elsewhere in Europe, they were subject to ethnic cleansing, abduction of their children, and forced labor. In England, Romani were sometimes hung or expelled from small communities; in France, they were branded and their heads were shaved; in Moravia and Bohemia, the women were marked by their ears being severed. As a result, large groups of the Romani moved to the East, toward Poland, which was more tolerant, and Russia, where the Romani were treated more fairly as long as they paid the annual taxes.

Amnesty International reports continued instances of Antizigan discrimination during the 2000s, particularly in Bulgaria, Greece, Italy, Romania, Serbia Slovakia, Hungary, Slovenia, and Kosovo. Czechoslovakia carried out a policy of sterilization of Romani women, starting in 1973. The dissidents of the Charter 77 denounced it in 1977-78 as a “genocide,” but the practice continued through the Velvet Revolution of 1989. A 2005 report by the Czech government’s independent ombudsman, Otakar Motejl, identified dozens of cases of coercive sterilization between 1979 and 2001, and called for criminal investigations and possible prosecution against several health care workers and administrators.

In 2008, following the brutal murder of a woman in Rome at the hands of a young man from a local Romani encampment, the Italian government declared that Italy’s Romani population represented a national security risk and that swift action was required to address the emergenza nomadi (nomad emergency). Specifically, officials in the Italian government accused the Romanies of being responsible for rising crime rates in urban areas.

Information and graphics courtesy of Wikipedia.