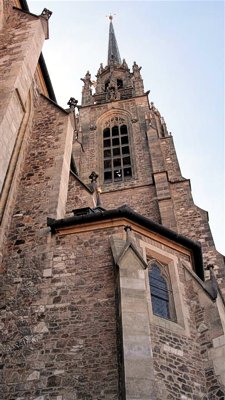 Yesterday as I was out and about in the city, I decided to take a closer look at the magnificent Baroque & Gothic styled Cathedral of St. Peter and Paul which sits atop Petrov Hill here in Brno. I took a few photos from different angles and even managed to take one perspective panorama by piecing together several individual photos. If you ever have the opportunity to see this building in person, you will understand that it is fairly impossible to take that shot from the side where I stood. Below are the photos in a little gallery.

The Cathedral of Saints Peter and Paul in Brno is located on the Petrov hill in Brno-Center. It is a national cultural monument and one of the most important architectural monuments of South Moravia. The interior is mostly Baroque, while the impressive 84m high towers were built between 1904 and 1905 by architect August Kirstein in the Gothic Revival style.

Traditionally, the bells of the Cathedral toll midday at 11 o’clock in the morning instead of at 12 o’clock. According to the legend, during the Thirty Years’ War, the invading Swedes laid siege to the city of Brno but had promised that the attack would be halted if they had not succeed in taking the city by midday on August the 15th. When the battle was underway some shrewd citizens decided to ring the bells an hour early, fooling the Swedes who broke off the siege and left empty-handed. Brno was the only city to repel the Swedes during this war.

If you can read Czech, here is the main website for the cathedral: http://www.katedrala-petrov.cz/