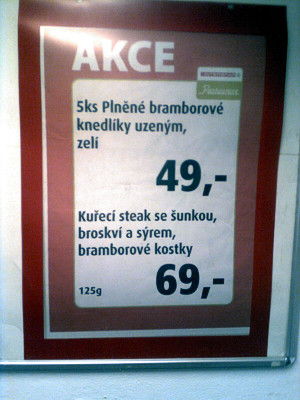 Learning a new language is challenging for sure but it is certainly a needed and necessary part of the life of an international missionary. Dawn and I are in the early stages of learning Czech language survival skills. So, I thought I would post a little blog article about this interesting and unique language. When you look at the picture in this article, you will see what is basically a quick sign telling about two items on a Czech “blue plate special.” Now, for my Czech friends who may read this, a “blue plate special” is simply a lunch special which restaurants sell at a slightly reduced “special” price.

Let’s state some basic facts about the Czech language. This information is derived from our friends at Wikipedia… Czech is a West Slavic language with about 12 million native speakers; it is the majority language in the Czech Republic and spoken by Czechs worldwide. The language was known as Bohemian in English until the late 19th century. Czech is similar to and mutually intelligible with Slovak and, to a considerably lesser extent, to Polish and Sorbian.

The phonology of Czech may seem unattractive to English speakers as some words do not have vowels: zmrzl (frozen solid), ztvrdl (hardened), scvrkl (shrunk), ctvrthrst (quarter-handful), blb (fool), vlk (wolf), or smrt (death). A popular example of this is the phrase “strc prst skrz krk” meaning “stick a finger through your throat” or “Smrž pln skvrn zvlhl z mlh.” meaning “More full of spots was dampened by fogs”. The consonants l and r can function as the nucleus of a syllable in Czech, since they are sonorant consonants. A similar phenomenon also occurs in American English, where the reduced syllables are at the end of “butter” and “bottle.” Czech language also uses the rolling “r.”

Whew, the technical description is even hard to digest! Now on to practical things as far as we are concerned. Being completely honest with you, starting the Czech learning process has been very stressful for us. Yes, it is necessary but it is difficult for us because in less than two years, this is our second introduction to a new language and culture. Acquiring the cultural expectations is not easy much less trying to begin a new language. We spent over a year in Romania and did “some” formal language learning there and ended up feeling comfortable with the cultural expectations. Now, we find ourselves in a very different culture and with a language which I have been told is one of the 6 hardest languages to master. When you consider this in the light of the fact that we are over 50 years old, you can probably empathize with us just a little. However, even though it is difficult, there is a certain excitement that comes with beginning to understand what the words mean in a new language…. even when you just pick out a word here and there. One interesting phenomenon that I have discovered is that now that I am trying to learn Czech, I suddenly think I understand Romanian better. Duh! When I try to concentrate on something simple like the Czech numbers, 1 – 10… I keep having the Romanian words pop into my head like static from a radio which I am trying to tune out. This gives me even greater appreciation for my colleagues who have learning multiple languages over time. For example, our main cluster leader, Boyd Hatchel, knows 5 languages, if I remember correctly. That is simply amazing.

Ok, let me wrap this little message up and at least give you an idea of what the menu items are. Now, trust me, I don’t know all of the words so I had to use Google Translate for some help! The first one is… 5pcs Potato dumplings stuffed with smoked cabbage for $2.90. The second one is…  Chicken steak with ham, peach and cheese, potato cubes for $4.05 . 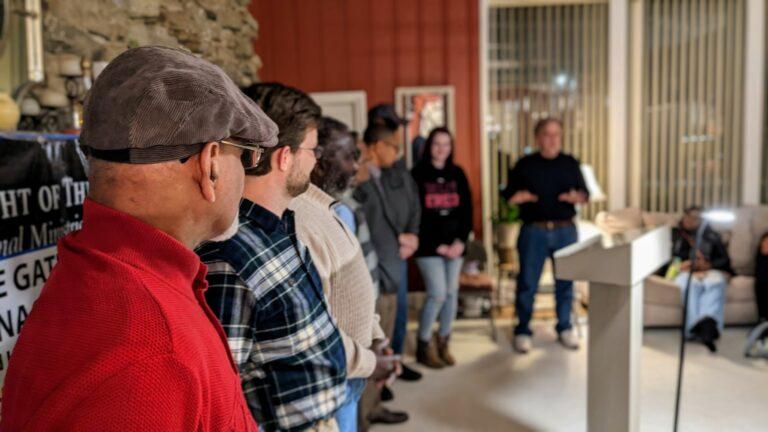 Last night was a treat for me specifically and for my gathering family. A missionary friend of mine, Ben Armacost, happened to be in the West Tennessee area visiting family. When I found out about this, he and I connected and I asked him to come and share with this wonderful house group. Naturally, if…