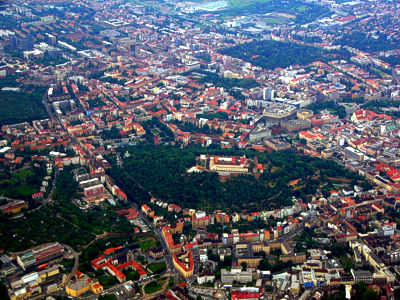 Brno is the traditional capital city of Moravia and the second largest city in the Czech Republic. Brno is also administrative center of South Moravian Region and Czech capital of judicial authority. The population of the city is about 405,000 while the population of the greater metropolitan area is about 730,000. Brno lies at the confluence of the Svitava and Svratka rivers and it surrounded by hills from three sides, notable part of the area occupied by the city is forest, about 28%. Average temperature is 9,4 °C (42.9 °F) and average Precipitation is about 505 mm (19.88 in).

Brno is the seat of the Constitutional Court of the Czech Republic, the Supreme Court, the Supreme Administrative Court, the Supreme Prosecutor’s Office, and the Ombudsman. Brno is also an important center of Czech higher education, with 26 faculties of 11 universities and about 80,000 students. Brno is also traditional place for performing big exhibitions and trade fairs on Brno exhibition center. The city is also known for hosting big motorbike and other races on the Brno racing circuit and for an international firework competition Ignis brunensis.

Most important main sights of the city are royal castle Špilberk and cathedral of saint Peter and Paul. The other castle in Brno is castle Veveri near Brno dam lake. Another important monument of Brno is villa Tugendhat, which has been included in the UNESCO list of World Heritage Sites. One of the attractive locations not only for tourist is also Moravian Karst.

Brno as such was acknowledged to be a town in 1243 by Wenceslaus I, King of Bohemia, but the area itself had been settled since the 2nd century. It is mentioned on Ptolemy’s atlas of Magna Germania as Eburodunum. From the 11th century, a castle of the governing Přemyslid dynasty stood here, and was the seat of the non-ruling prince.

During the 14th century Brno became one of the centres for the Moravian regional assemblies, whose meetings alternated between Brno and Olomouc. These regional authority bodies made decisions on political, legal, and financial questions. They were also responsible for the upkeep of regional records.

During the Hussite Wars, the city remained faithful to Sigismund, Holy Roman Emperor. The Hussites twice laid siege to the city, once in 1428 and again in 1430, both times in vain. 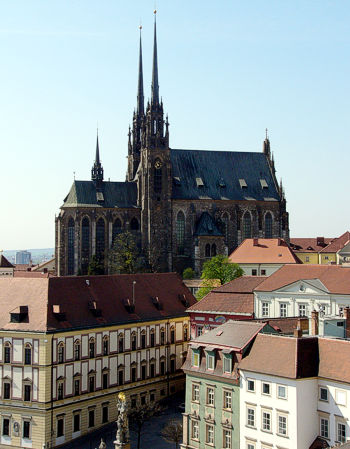 During the Thirty Years’ War, in 1643 and 1645, Brno was the only city to successfully defend itself from Swedish sieges, thereby allowing the Austrian Empire to reform their armies and to repel the Swedish pressure. In recognition of its services, the city was rewarded with a renewal of its city privileges. In the years following the Thirty Years’ War, the city became an impregnable baroque fortress. In 1742, the Prussians vainly attempted to conquer the city, and the position of Brno was confirmed with the establishment of a bishopric in 1777. In 1805, The Battle of Austerlitz took place about 10 kilometers (6 miles) southeast of Brno.

In the 18th century, development of industry and trade began to take place, which continued into the next century. Soon after the industrial revolution, the town became one of the industrial centers of Moravia and the Austro-Hungarian Empire — sometimes referred to as the “Moravian Manchester”. In 1839, the first train arrived in Brno. Together with the development of industry came the growth of the suburbs, and the city lost its fortifications, as did the Spielberg fortress, which became a notorious prison to which not only criminals were sent, but also political opponents of the Austrian Empire. Gas lighting was introduced to the city in 1847 and a tram system in 1869. Mahen Theatre in Brno was the first building in the world to use Edison’s electric lamps.

During the “First Republic” (1918–1938) Brno continued to gain importance — it was during this period that Masaryk University was established (1919), the state armory and automotive factory Československá státní zbrojovka Brno was established (1919), and the Brno Fairgrounds were opened in 1928 with an exhibition of contemporary culture. The city was not only a center of industry and commerce, but also of education and culture (see the section on notable people from Brno).

In 1939 Brno was annexed by Nazi Germany along with the rest of Moravia and Bohemia. After the war, and the reestablishment of the Czechoslovak state, the majority of ethnic German population (except antifascist, members of resistance, mixed marriages etc.) was transferred to Germany or Austria.