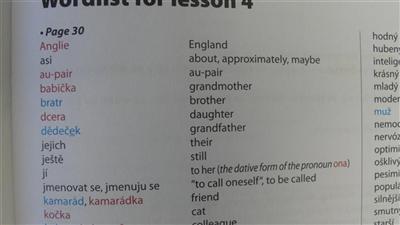 This is a little information about the musings of an old(er) American and his attempts to learn Czech language. None of this is designed to offend or annoy… of course not! This is just an attempt to relate to my friends back home in the states an idea of what our experiences are with the subject of language learning.

As you know, we also were active learners of Romanian language for the first year and a half of our term with imb. Now, we find ourselves “attempting” to learn Czech. Look at the pictures below to see some snapshots of a book which we are using to learn the basics. Basics, mind you. The Czech language has a lot of accent marks which cause variations in pronunciation with the letters which they are attached to. This is fairly typical in many languages exect, of course, English. Arrggggg!  For an English speaker, there is another huge mental roadblock with the construction of words both in Romanian and Czech but it is even more defined in Czech. This is the fact that you do not have the same vowel / consonant structural groupings which you do in English. How many times do you recall your elementary teacher telling you that you just cannot leave those vowels out… well, yes you can! In Czech, you verbalize each sound of each latter and then place all of the sounds together in a string of sound. To an English speaker, you will swear that you hear those hidden vowel sound mixed in but to the native Czech speaker, they would tell you no. This is just the difference between how they were taught and how an American is taught. This does not mean one version is right over the other. Both are appropriate for the language being considered. It is just very hard to remove all of your preconceived ideas and rules from your mind… especially at my age.

Ok, I won’t keep rambling on about this. If you have ever studied a second or third language, you know what I mean. If you have not, you might find it interesting to do so. One good way to do this for free is by using an online tool or learning community such as Live Mocha. Their site is here: www.livemocha.com and I am sure you would find it intriguing. Honestly, I will likely never be fluent in Czech language. I will probably not live here long enough for that to happen but it is important for me to put forth an effort to learn the basics and show respect for the language and customs of the place(s) that I find myself living. Well, there you have it… check out the pictures below and get just a small taste of learning Czech language.