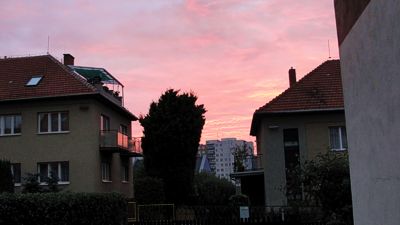 …to start all over again. Look at the photo for this article. I took it yesterday morning. The picture doesn’t do it justice though. The sunrise was magnificent. The redness of the clouds reflecting the glory of the sun was much more intense than what you see in the photo. The coolness of the day was refreshing and things were quiet and so peaceful.

Let this little message be an encouragement to you as you consider the simple truth that each morning holds a promise. No matter how bad things seemed to you last night, this morning you are presented with a life canvas from God above. How you paint the picture will be up to you. Will you put the problems of the past behind you and reach forward to the prize of hope? Will you allow the dark forces of this world rob you of the peace which the next world can hold for you? The choice is yours. Consider this… you know the story. Paul and Silas had a choice to make in the depths of a horrible Roman prison. Who would blame them, even as Christians, if they boiled over with anger toward the cruel men who beat them and locked them in the stocks. Yet, they chose to sing songs about their faith in God. Because of their choice and of course, the power of the Spirit of God, they were set free and people responded to their choice in a way that brought them salvation as well. Indeed, every day holds a promise and a choice. Make the best of them.