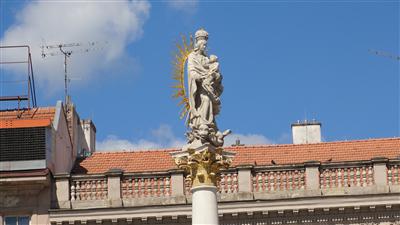 I think it is a valid statement to say that a potential problem with religion is religion itself. Organized religion quite often morphs into something which is based more upon personal preference and heritage than upon a genuine heart felt relationship with God. How can this be? Certainly religious people have the best intentions in sculpting their idea of religion into a masterpiece to honor God as they see Him. I think that most of time, this is probably true.

So, is religion a bad thing? I don’t think so because the Bible teaches us a lot about religion which pleases God. (James 1:27) It also warns us about people who use it as a weapon to buffet others and attempt to control them. (Matthew 7:15-20)  It seems like these days, there are many ministers who want to bash “religion” rather than teach on the differences between false and true religion.  The older I get, the more I realize that we need to be more considerate of the ideals which are important to people within the context of their religion. I certainly do NOT mean that we should excuse obvious heresy or doctrine which is not biblical. However, there are points within the different Christian belief systems around the world which are not worth fighting about just so we can enforce our particular views upon another. AGAIN, I do believe there are some points or doctrines which are not negotiable. The truth of the Gospel message as related through the scripture is not to be perverted just to make oneself feel good or to somehow sidestep holiness. No, not at all… as Paul said… “God forbid!”

Ok, let’s get back on track here… look at the picture I used for this article. It is a beautiful depiction of the virgin Mary and the baby Jesus. In and of itself, there is nothing wrong with honoring Mary with a statue and revering her as the mother of the Savior. Yet, some put more emphasis on her than on Jesus. Mary was indeed a very special woman… indeed she was highly favored by God. However, Mary cannot save your soul… only Jesus can. (Acts 4:12) In the country that I now reside, you still see many beautiful references to the religion which used to be very important to people but now it seems that most Czech people do not want to be connected to any formal religion. This is a sad state of affairs to be sure. The image of organized religion has been tainted here by those who abused it throughout history here in Europe in an attempt to force and control people to behave a certain way. In my country, “The Land of the Free,” we have also been guilty of abusing religion to attempt to control people. Oh, I could go on and on but let me simply wrap this up by challenging you to step back and take a fresh look at what the Bible teaches us about religion and having an honest and meaningful relationship with God through His son, Jesus Christ. It will not be easy to push the bad thoughts out of your mind but if you will, I believe that the Spirit of God will give you a new vision of religion and Christianity which will empower you to live an abundant life… amen.